I just finished reading Mountains Beyond Mountains: The Quest of Dr. Paul Farmer, a Man Who Would Cure the World. I’ve known of the book for a couple years but never quite got around to reading it, likely because I knew it would challenge me. After the Haitian earthquake about a month ago, I remembered the book, decided I must read it, and then Barnes & Noble had it on sale. So here I am. 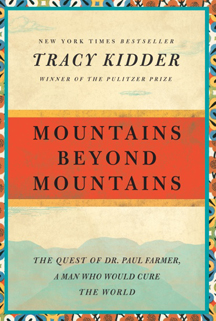 In the early 1980’s, Dr. Farmer visited Haiti and decided to dedicate his life to helping the Haitian poor. He founded his own hospital and community health system in Cange, one of the poorest towns in the poorest regions of Haiti, the most impoverished country in the western hemisphere. This enterprise, Zanmi Lasante (Partners in Health, or PIH) is now active in several other countries worldwide, and Farmer pioneered more successful approaches to controlling TB, HIV, and other infectious diseases in third-world countries.

Farmer is at least as rich a character as Dr. Gregory House, but much more likable than that fictional misanthropic genius. He had a peculiar childhood that involved living in a school bus and later a houseboat, and his father cared nothing for what other people thought of his family’s lifestyle. When he came home from Duke (which he attended on full scholarship) and announced he could only wear “preppy” clothes, his father retorted “the preppy can still clean the bilge.” Like his father, Farmer seems unable to sit still, and even in med school he constantly flew back and forth between Harvard and Haiti. In the book, Kidder spends part of a “light month for travel” with him in which they hit Haiti, Miami, Cuba, Paris, and Moscow, visiting with patients, public health experts, and Farmer’s wife and daughter. He answers hundreds of emails in the process. He sleeps an average of four hours a night and often skips meals. Once he nearly required a liver transplant from untreated hepatitis A-- he wouldn’t stop working until his condition had deteriorated to that point, and he has mild asthma as a result of a cured TB infection. He’s faced down ruthless soldiers and arrogant WHO officials, and was twice banned from entering Haiti, thought he got past one with the payment of an “insultingly small” bribe.

Every organization develops its own jargon, and Farmer has a rich vocabulary of acronyms and inside jokes. When his brother misspelled “Haitians” as “Hatians” he took to calling them “Hats” and the country “Hatland.” He often signs his diagnoses “Love, ID” (Infectious Disease, his specialty) and sophistical arguments against treating the poor with advanced techniques are “well-formed stool.” There’s no end to his witty and frequently sarcastic commentary on the indifference of most of the first world to the suffering of the third. Explaining why he made free use of the tuberculosis labs at Brigham and Women’s Hospital for testing patients from Haiti and Peru, he said, “Massachusetts is a great state, it has a big TB lab, lots of TB doctors, lots of TB nurses, lots of TB lab specialists. It lacks only one thing. Tuberculosis.” (A donor eventually covered the entire cost of his lab use, calculated at hundreds of thousands of dollars.)

Much of Mountains Beyond Mountains concerns the growth of Zanmi Lasante and Farmer’s mission to change the WHO standards for treating TB, which at the time were ineffective against multi-drug resistant TB and contributed to its development, but I was especially fascinated by his beliefs. What motivates this guy? The answer is, naturally, unclear, but Farmer calls his lifestyle a way of mitigating “ambivalence,” that’s to say, he just can’t live with equivocation. Speaking to Kidder about his intensity, he says “The problem is, if I don’t work this hard, someone will die that doesn’t have to. That sounds megalomanical. I wouldn’t have said that to you before I’d taken you to Haiti and you had seen that it was manifestly true.” At the same time, Farmer realizes few people can maintain his pace or are likely to match his accomplishments. Thinking out loud as he replied to an email from a student who was doubtful he could what Farmer did, he said, “I didn’t say you should do what I do. I just said these things should be done!” One of his colleagues also adds, “Paul is a model of what should be done. He’s not a model for how it should be done.” Even Farmer would allow that lives of service like his depend on lives of support. When his biggest donor said he felt like leaving everything behind to work beside Paul, he replied, “In your particular case, that would be a sin.”

Yet the what should be done is controversial. The stated mission of PIH is to “provide a preferential option for the poor in health care,” or “O for the P” in Farmer’s lexicon. This means treating patients with the best possible care, despite the costs. In the aftermath of the Haitian earthquake, PIH medevaced some patients to the U.S. if they were likely to recover from injuries that could only be treated there. The cost of each of these flights is in the tens of thousands of dollars, but Farmer sees this as relatively cheap in comparison to say, the salary of the average doctor or the total yearly amount Americans spend on pet grooming. Farmer describes himself as Catholic and an adherent of liberation theology, though he also claims to dislike dogma. His outlook seems essentially pragmatic-- whatever philosophy helps the poor the most is one he’s likely to back. Though he grew up nominally Catholic, at Duke he was especially influenced by the example of the nuns who formed Friends of United Farm Workers, who were advocates for the migrant workers (largely Haitian) who lived in camps near the school. The “WL” (White Liberal) academics preferred to write papers and argue about the workers’ problems, while the nuns directly helped them and were willing to do “the scut work.” Regarding religious belief in general, he states,

The fact that any sort of religious faith was so disdained at Harvard and so important to the poor–not just in Haiti but elsewhere, too–made me even more convinced that faith must be something good.

“A preferential option for the poor” is one of the mantras of liberation theology, a movement and set of beliefs primarily associated with certain Latin American Catholic theologians. I’m not an expert on this myself, but despite Farmer’s example, I’m skeptical of its aims. It seems to amount a combination of Marxism and Christianity, and in my view is opposite and equal to what’s commonly called “the religious right” in America. If O for the P means we should focus our charitable efforts on the poor, then sure, I agree with that. Interestingly, I recall reading that a good percentage of American’s charity donations go to services that primarily benefit to the rich, like private schools or arts foundations. (I should look up that statistic.) If O for the P means that poor are somehow more loved by God than the rich, I don’t agree, but that seems to be the practical attitude of many liberation theologians, who see the rich as inherently antagonistic to the poor. What does “blessed are the poor” mean, anyway? Does poverty bestow a special virtue? Are there no sinners among the poor? Farmer adds another criticism:

If one pushes this -ology to its logical conclusion, then God is to be found in the struggle against injustice. But if the odds are so preposterously stacked against the poor–machetes versus Uzis, donkeys versus tanks, stones versus missiles, or even typhoid versus cancer–then is it responsible, is it wise, to push the poor to claim what is theirs by right? … We know the answer to that question, because we are digging up their bodies in Guatemala.

Liberation theology seems to imply a far too materialistic conception of reality. What happens after the downtrodden are liberated? Suppose they get their freedom and are fully enfranchised. Liberation theology would seem to have no application at that point.

Mountains Beyond Mountains hasn’t raised questions for me so much as amplified them. I can live with more equivocation than someone like Farmer, but this book has lowered my tolerance.